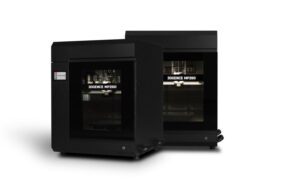 At the recent global trade expo for 3D printers in Frankfurt called Formnext, dozens of metal 3D printers drew crowds eager for a solution to their spare part problems. A new area of low-cost desktop machines that print metal parts is becoming more sought after.

Designed for more than producing spare parts, these entry-level machines for metal 3D printing are regarded as a way for companies to produce metal prototypes quickly and affordably without the high cost. Several companies showcased new 3D printing technology.

“Our customers want a way to produce metal parts that’s as easy as producing plastic parts,” says Eric Pallarés García, co-founder and CTO of Barcelona-based BCN3D, which recently expanded to New Jersey. “The whole 3D printing industry is chasing metal 3D printing. But the truth is that, nowadays, affordable available solutions, if any, are very scarce.”

Irvine, CA based Raise3D Technologies is among the manufacturers now developing 3D printers specifically for metal filament. The company just launched its first move into metal 3D printing with the Forge 1, complimenting its existing line of plastic 3D printers. In a collaboration with metal filament maker BASF Forward AM, Raise3D developed a printer that’s a fraction of the cost of those that use metal power.