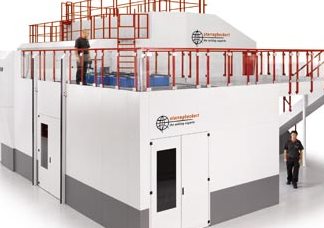 BAE Systems has successfully commissioned an innovative titanium component manufacturing machine at its Samlesbury facility in Lancashire, England. The machine is the most advanced of its kind in the world, setting new standards for high-end manufacturing in the UK. The machine, referred as a StarragHeckert BTP5000, can produce titanium components more than three meters long to tolerances that equate to a third the thickness of a human hair. The components are used in the manufacture of the F-35 Joint Strike Fighter, the rear section of which is built at Samlesbury by BAE Systems before being shipped to Lockheed Martin in America. The exact tolerances delivered by the new machine guarantee that the outer shape of the F-35 matches up to the exacting standards needed to make an aircraft that meets the required low observability (stealth) performance capability demanded by Lockheed Martin. The machine sits in a temperature and humidity controlled production facility which exactly matches that of the final assembly facility run by Lockheed Martin in America. Also referred to as the Long Spar Longeron Machine, the product features twin spindles capable of machining two parts at the same time. At peak rate production aircraft sets will be produced at a rate of one a day. The initial concept for the machine came as a result of a discussion between BAE Systems and StarragHeckert machine tools, both of which were looking at ways to deliver a more accurate and effective machining method for long titanium parts. The Long Spars and Longerons machine is the first of two machines to be installed in the machining facility. The second is scheduled to begin installation in 2014.