The State of New York has begun public hearings on natural gas drilling rules in the Marcellus Shale. Environmentalists say that the rules currently in place are too lax, but industry says that they are so restrictive drillers would avoid exploring in the state. No permits for drilling in the Marcellus formation have been issued since 2008 when the state began its review of the hydraulic fracturing process. 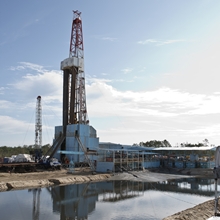