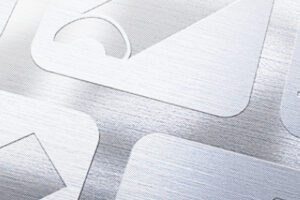 Tinplate is mainly used as a material for containers such as food and beverage packaging cans, as well as general cans. It is an environmentally friendly material whose recycling rate exceeds 90% in Japan. The basic features required include corrosion resistance, lacquer adhesion, weldability, an attractive outer appearance and safety as a material for food containers.

To date, Nippon Steel has been developing, manufacturing and supplying various types of tinplate in accordance with environmental regulations around the world. In the meantime, Europe has decided to ban the use of hexavalent chromium in the manufacturing process of tinplate (chromate treatment process) as per the REACH Regulation (will come into force in April, 2024).

In order to satisfy such strict international environmental regulations and supply requests from consumers, we have developed chromate-free tinplate called “EZP™.” As for the manufacturing process, the existing chromate treatment process will be replaced with a zirconium treatment process which forms zirconium oxide layer that have performance equivalent to that of conventional chromate layer. We have patents for this technology pending approval in many countries.

EZP™ is the trademark for our chromate-free tinplate, which was named after the words “feel easy” and “product,” to reflect our wish that this product will make its users “feel safe”. The green leaf in the product logo indicates that it is a safe and eco-friendly product. Recognized for its high safety as a food container material, EZP™ has been officially certified as a Food Contact Substance by the United States Food and Drug Administration (FDA) and the European Union (EU). It is currently pending approval by MERCOSUR (the Southern Common Market).

Nippon Steel has started the full commercial production of EZP™ in this fiscal year. Because multiple consumers interested in EZP™ are currently evaluating this material, we expect its sales to increase further in the future.